It's almost March and for many of us in Sri Lanka, the month is synonymous with the term "big match". The month in which rival boy schools play their main cricket matches against each other. And no rivalry was greater or had repeated itself longer than the Royal Thomian.

I myself was part of the parade of blues and blacks. The staunchly proud Thomian brigade. And if I had to pick the most fond times in school, they'd effortlessly point to early years of going to the big match. Especially when I started going alone. One memory of these big matches stands out very clearly to me. And it wasn't the youthful courting that we did so vivaciously. No. The memory I have is of how I obtained tickets.

You see, just like any sporting event venue, there were categories of seats. The all boy school tent ticket was just 50 rupees. Naturally. But there were tents we would want to travel to, particularly the one fondly referred to as the red cow tent so named after its sponsor. Their tickets were in a different league in pricing however. The choice was simple. Buy a ticket, or con our way in.

For the record, and here I must digress, I was a modern day artful dodger when it came to obtaining entry to a tent. There were always two parts to it. One was a ticket stub. The other was a re entry pass. Via friends of mine who had bought tickets to the tent, I would go in using their ticket and re entry stub. And then through various means of misdirection and trickery, I would bamboozle the security into handing me multiple re entry passes. Delighted, we would spread the ticket stubs and re entry passes around other friends and bring them in. It didn't matter how the system changed. I was good at what I did and I exploited it for my own youthful fun.

There did come a day though where I didn't want to depend on my friends for tickets. I'd rather be one of the people inside having access to the tent which would allow me to bring people in faster. And to be honest, there was no thrill in the act of gaining that first entrance anymore.

Tickets, as I mentioned before, were expensive. 1300 rupees at the time I believe.

I must shift attention now to a gift my sister once received from a delightfully wonderful uncle and aunt. A friendship bracelet how to book. It came with the threads, manual, clip, and a hardboard back cover that one could use to make this. Although I was a student with not an inkling of interest towards the handwork class (an equivalent of arts and crafts), I was always fascinated with various types of crafts at home. And it happened that one day I grew impatient that my sister never so much as glanced at that book, and thus I appropriated it. I asked for my forgiveness afterwards, but the bug had bitten me by then. I still consider friendship bracelets one of the most calming and joyful forms of craft.

But what connection could this possibly have to my conundrum? 14 year old me, without access to money, wanting to purchase a ticket for the then hefty price of 1300 rupees.

A practice that continues up to today is the street vendors' sales of bits and bobs come big match time. From hats to flags, the hawkers would line up outside school baskets full of goods made to match the blue-black-blue of the Thomian flag, and peddle their wares till the children got into the waiting school vans and went away. One of the more popular items at the time were friendship bracelets. Sold for 5 to 15 rupees, a piece, the cheap cotton would be weaved to a chevron pattern of alternating colours.

And this is the point where everything ties together (pun intended). I was going to sell friendship bracelets to make the money for tickets.

There was an issue of practicality however. At 15 rupees a bracelet and a top speed of 1 day for a similar looking chevron bracelet, I would have to settle for making money for next year's ticket.

So instead, I sold bracelets at prices up to 500 rupees. Within a few days I had enough money for the tickets, refreshments, and post match outing.

All this while the students in my class had access to similar goods at up to 20x lower prices; the ones selling at 100x were in an entirely different market. Here is the tiny tale of how I worked my way up the price bracket through validation, differentiation, and then deep specialisation.

My first goal in this experiment was to see if I could convince people to pay 100 rupees for a similar product. I made a batch of 5 chevron blue-black bracelets and brought them over. I talked to the people in my class. Quality was my difference I told them. Mine were washable. Mine would last. It'd be the last bracelet you'd need to buy for years. The people outside sold shoddy goods made with cheap materials that would come loose after a few days of wearing it. I showed them how the threads of the hawkers' goods frayed while mine were precise knots that would last.

They bought it. Literally. And I wasn't cheating them. I meant every word I said. I had already decided I was going to sell less but up the quality to the point where if quality was your interest, you couldn't say no. I eventually upped the price to 150 and then 200 a piece as the date of the match drew nearer.

Of course there were people who balked. And others who asked if I didn't have anything cheaper to sell. After some referencing through that book of bracelet designs, I had a solution. For 50 rupees, I could make a bracelet that I could produce 5 of in the time I had after school. That was 250 rupees worth of sales I could create where I was previously creating 100. Still more expensive than the street vendor. Still backed by the same quality guarantee. For reference, here's one of that design I made for my wife a long time ago. 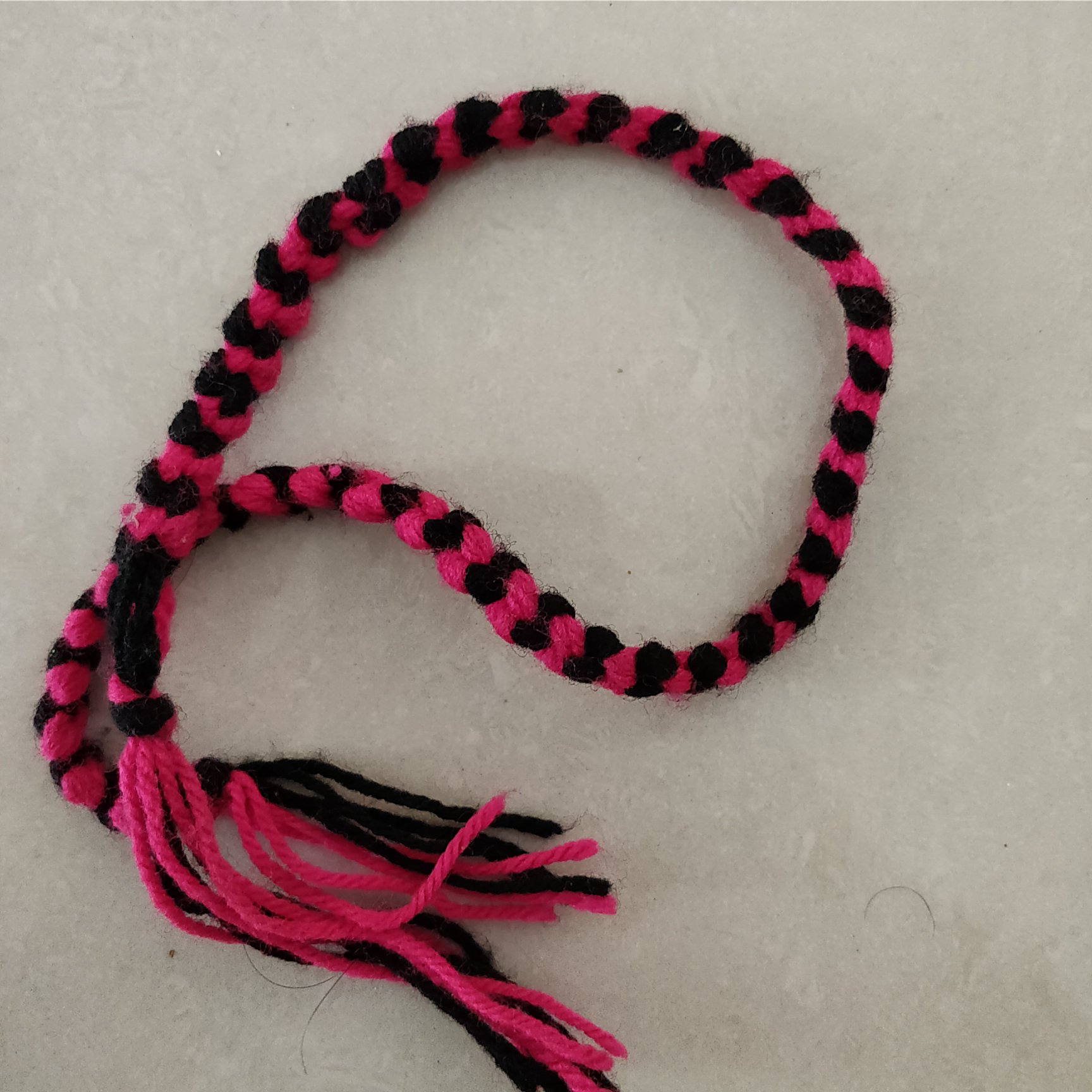 I wasn't kidding when I said I made things to last. But you can still see how the design was. Simple. Quick to make. 10x more expensive than the hawker.

At this point I had my business. I even had repeat customers. I knew I was going to have enough money to buy a ticket. But I wanted to push this further. So I offered a few new things. Two new designs. A few different colour combinations to take for significant others. I tried one custom color palette but it turned out that waiting for a decision slowed the sale down to the point where I realised that people actually preferred being given a small number of things to pick from.

Even so, for a four colour tribal design that took me 1.5 days to finish, I charged 500. And I sold more than a few.

That could have been a bigger story. One where I went on to build a business and disrupt the street vendors market. It was none of that. I just discovered a few things about myself.

I didn't care for making as much as I could. All I wanted was enough where I had already decided what enough was. I could have made more money. But once I had my goal, I closed shop. People asked for more. I said no.

I didn't care for taking over a market. I didn't want to produce enough to actually sell to every student in the school. I knew people who had enough money, who cared enough to want quality, and I sold to them. If anyone so much as indicated that the quality wasn't a concern to them, I dropped it immediately. I respected the fact that there were different tastes out there and that my product was never going to be something for everyone.

I did care about quality. And I didn't make sleazy sales. I'd make something and I'd sell it only if I was damn proud of it. Even if it took me more time. I made a promise that I'd sell bracelets that would last years and I'd be damned if I was going to break that commitment.

And that was my first, and last, entrepreneurial venture of my life. I did the sales for one more year. Only to make enough for the tickets and some refreshments. I didn't need anything else. By the year after that I was saving money I received from religious festivals and my birthday enough to buy the tickets I wanted. It was fun but not something I wanted to keep doing.

At the end of all of this, I learnt a lot and I still treasure the memory. I was proud of the standards I kept. And if I ever run a business of my own, I like to think that I know what kind of business it would be. And that, would be a tale for another day.

Posted on February 23 2018 by Adnan Issadeen