My fellow Buffer colleague José launched his side project today[1]. It's called PlanLeave, a leave management app for teams, and is available at USD 1.99 per month per user. At Buffer we use Timetastic for our leave management and it's a great app that leans towards simplicity. I was curious about the differences between the two.

From what they've written on the blog, PlanLeave definitely leans towards a philosophical approach of being mindful about leave and mental well being versus treating leave purely as a dry transaction with the company.

Managing people’s paid time off has always been focused on making sure that people took only the time off they were entitled to and no more. This is how most apps focused on this work nowadays.

But now, we live in a different world. In a world where companies seek employees’ happiness and they don’t want them to work until they burn out.

Balanced, well-rested teams are more productive than exhausted ones.

That’s why I’m creating PlanLeave and I can’t wait to show it to you soon. 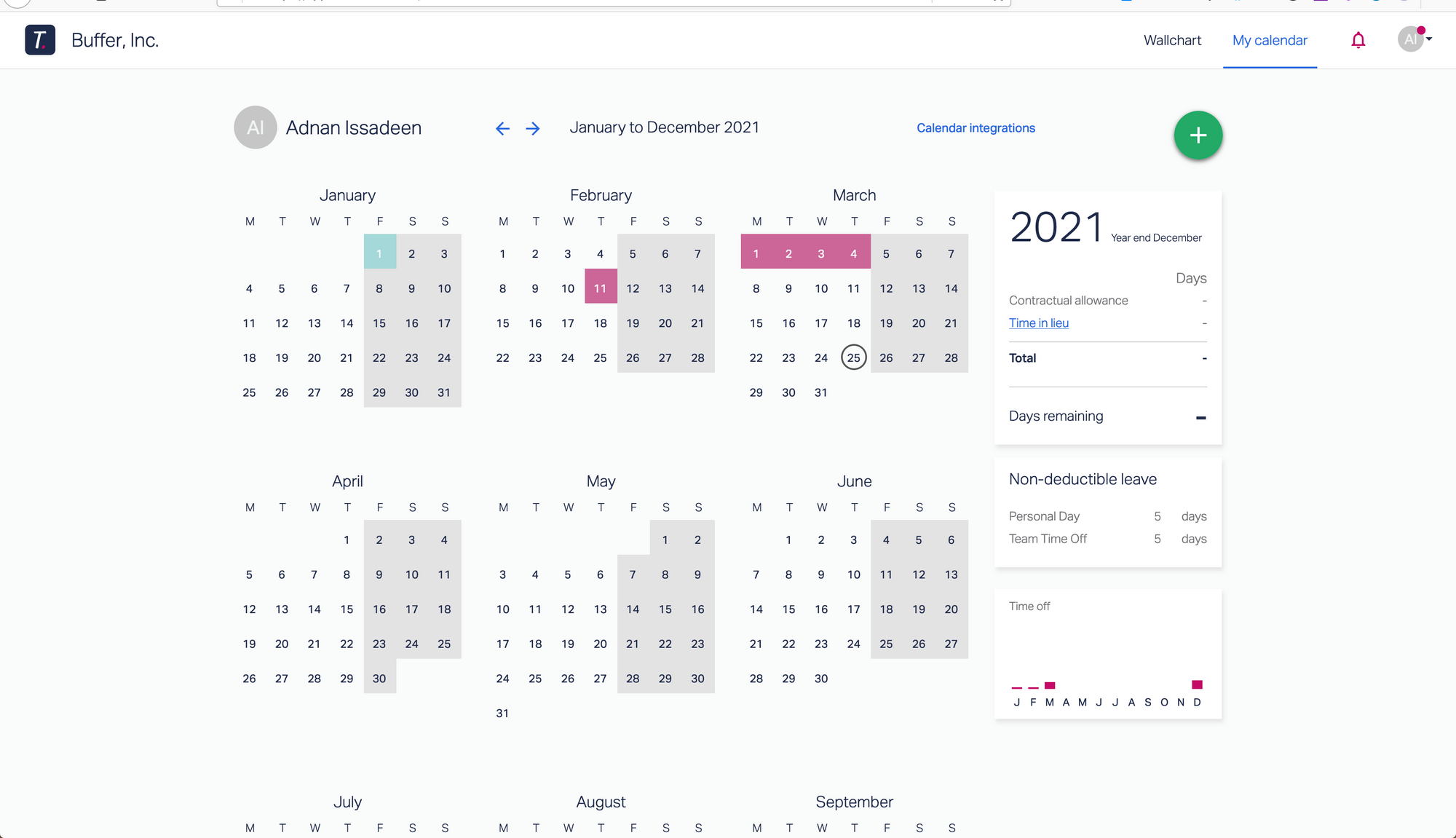 I've cropped out my team members from the wall chart, but it doesn't take much imagination to know what it would look like. As can be seen, Timetastic focuses heavily on who's on vs off first and the "my calendar" page is focused mostly around how many leaves are left (I'm lucky that Buffer has unlimited leaves) 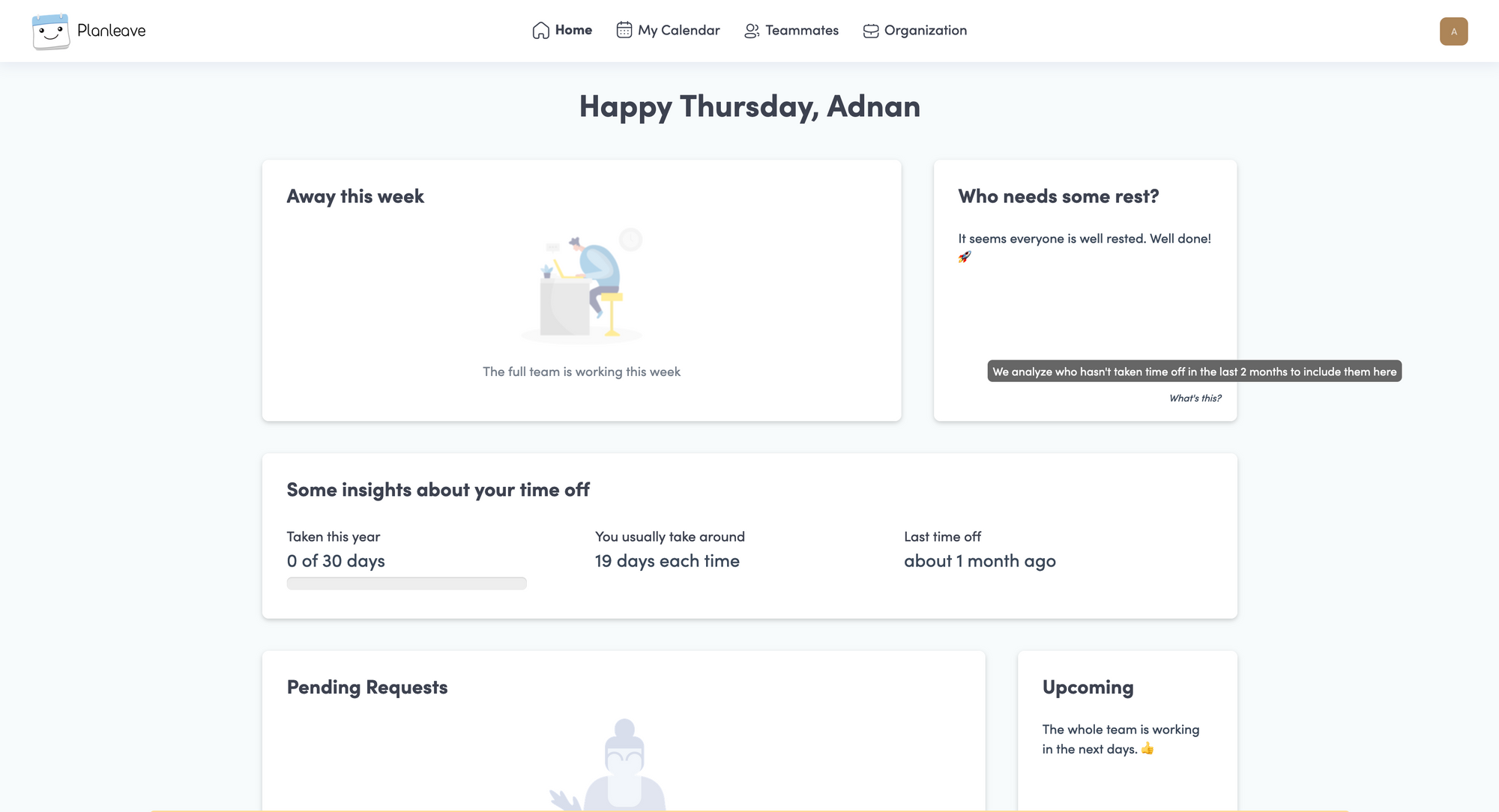 Mindfulness about well being is absolutely baked into the product. This is really cool to see. I'd love to see how this gets taken further and how the workflow of leave requests is influenced by PlanLeave's guiding philosophy. I am very fond of seeing how new products in crowded markets are carving space for themselves via philosophical differences.

That said, I'm curious as to whether this problem can be approached by building on top of platforms that offer APIs. Many of the players in this space, Bamboo, Timetastic, etc, have open APIs which could theoretically be used to build an app focused on just the mindfulness part of things.

At the same time, I did wonder whether hey.com could have used this approach too to email and I even considered building my own layer on top of gmail to scratch my itch. Except now I use hey as my email provider 🙈

I've gotten accustomed to seeing various art/writing generators pop up over the past year. They are each based on some deep learning model, where a mountain of stylistically similar prior work is fed into the system and is then used to spit out completely original work of the same style. With Open AI's effort's in this area including their GPT models, this type of experiment has really blossomed. One of my favourite applications of this was a poetry machine made by Yudhanjaya and later incorporated into his book, "The salvage crew".

Basically, I didn't think I could be surprised by any of these generators anymore... Until today. NOTE: while writing this I ran into doubts which I added to the note

I've written about Beeple in the past — guy whose made a new image (mostly 3d renders) everyday for 5000 days in a row, same one who sold a 69 million USD NFT. This generator seems to have taken most of his social commentary work around Biden, Trump, Elon Musk, and cryptocurrencies, and has learnt how to spit out the kinds of images that Beeple might make in a day. Which, if that's how it's done, seems pretty cool.

Doubts on this being generated

While writing this though, I started digging into the app after. I had just gotten the below image which I thought was very similar to an artwork Beeple might make. 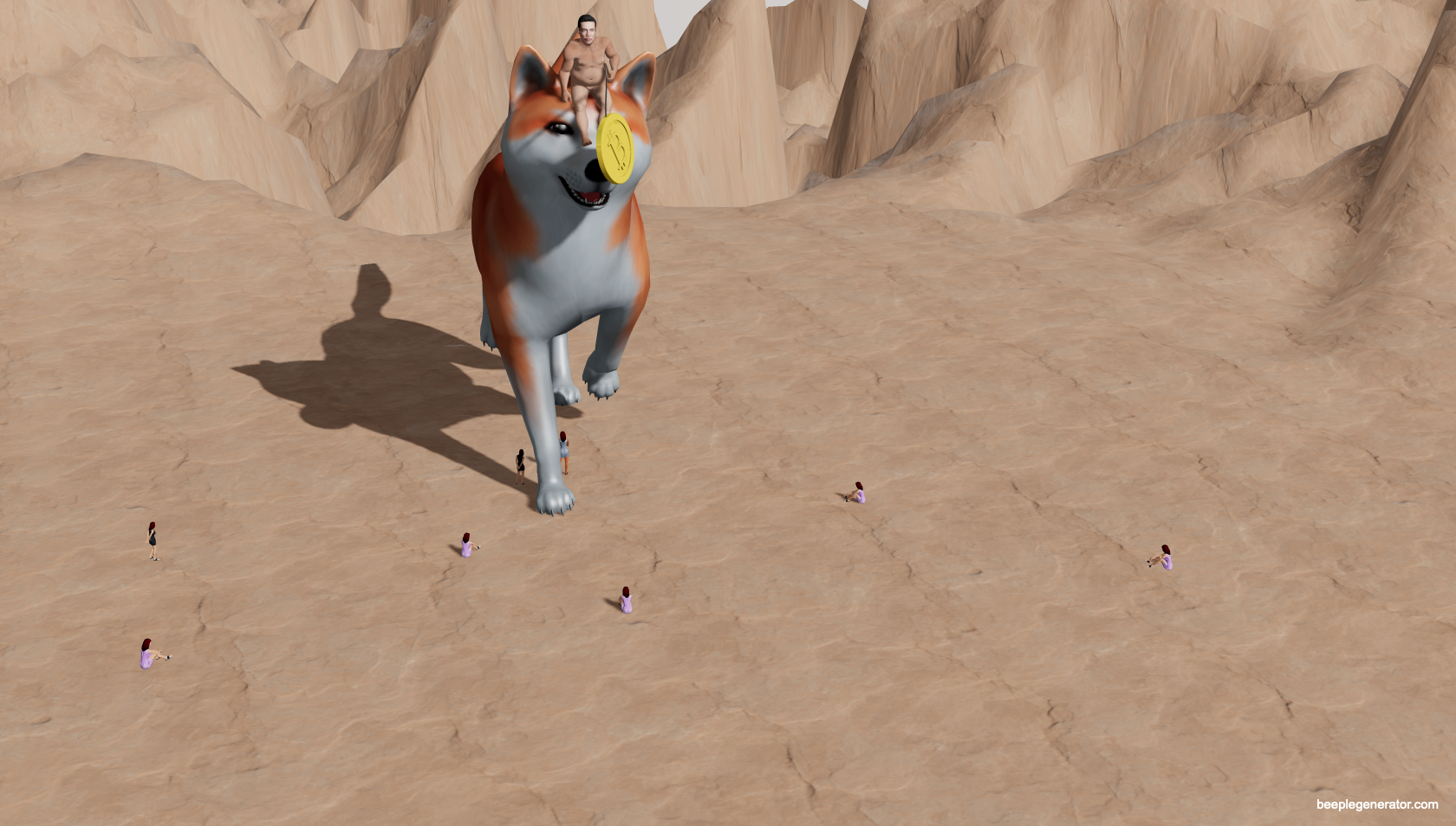 Then I went onto Twitter to find tweets from the makers 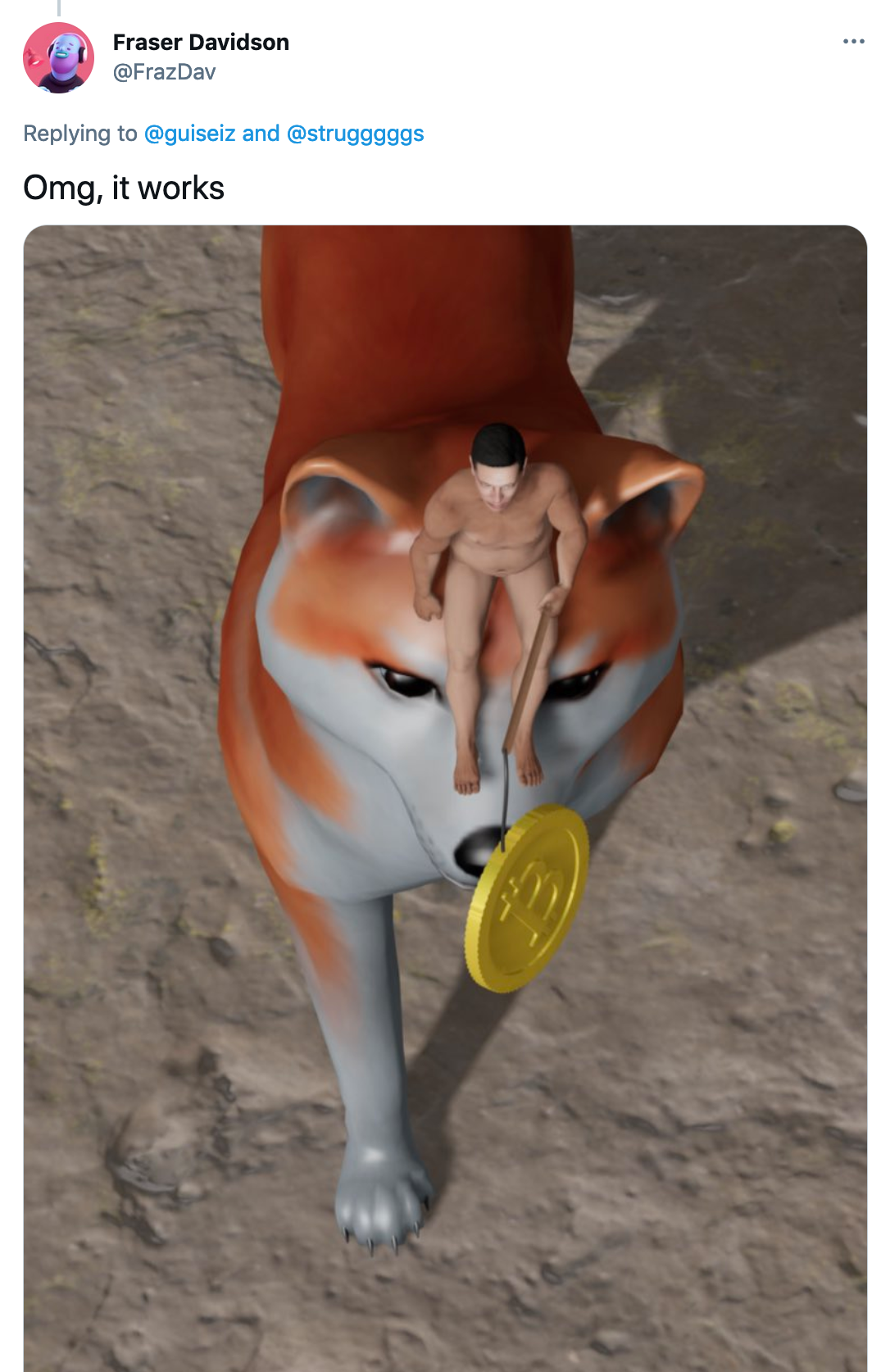 And I saw people tweeting other images which I'd already seen and I could see more tweeting the same stuff even if I hadn't seen it on the site myself. That's not how "generation" works. really. New stuff has to be created over time automatically.

So without further information, I wonder if this is a scam that has manually pre-created images and serves them up at random? It's cool if they are pre-generated using a deep learning model, but I can't see any mention of how these images were generated. Instead, it seems like everyone, including myself until moments ago, is assuming that these are generated by some deep learning model. That would be pretty disingenuous if the compositions are in fact created manually and the only automated generation might be the computer editing bits and bobs such as where people are standing in a scene or a few colours.

Worth pointing out that even Beeple tweeted about this. Probably because the site is currently being sold as a NFT. But I wonder if Beeple has thought about whether this is presenting itself in a very dubious way.

My favourite things to do

I spent some time thinking about it last night; what are the things I love to do when I'm on my own? It came down to writing, and drawing.

With drawing, the love for that is something I've rekindled from recent times. I'm currently teaching myself to draw with the goal of connecting it to my love of writing and creating stories for children.

For the longest part of my life, writing has been a habit. I've written stories. Poetry. I've made attempts at indie journalism. And my largest collection of writing lives in stuff that will only ever be for my eyes: my journals.

But what made me really think of this was, as I was finishing up yesterday's links and notes, I couldn't help think that if I was left to my own devices and told I could do whatever I wanted without worrying about consequences, I'd probably spend entire days writing. There's a lot of writing I want to do this year, so let's hope the passion burns strongly throughout.

Next links and notes (March 26th)